A TALE OF TWO ESSAYS

It’s May, the season of college graduation ceremonies, when the college careers of seniors terminate at what are paradoxically called “commencement” exercises.

A great deal of attention will be paid to those invited to speak at these ceremonies, even though most of what they have to say will be rich in platitudes and eminently forgettable.  In fact, this year’s crop of commencement speakers will probably be better remembered for those who did not speak than for those who did.  Ayan Ali Hirsi, Christine Lagarde, Condoleesa Rice, Charles Murray, and Robert Birgeneau are among a growing list of interesting people who have been “disinvited,” or otherwise pressured to stay away, in a misguided campaign to shield undergraduates from viewpoints that might make them “uncomfortable.”

Two Ivy League student essays are worth examining, if only to note their starkly contrasting visions. One is an optimistic picture of a world in which success is possible to all, provided only that they are equipped with the right values.  The other is a grim picture where victimhood is inescapable, no matter how many blessings one receives.  It may be coincidence, but the fact that the first is written by a freshman, and the second by a senior, suggests a troubling explanation: the modern university may be deadening the spirit of its young charges.

“Checking My Privilege: Character as the Basis of Privilege,” written by a Princeton freshman, responds to a trendy tactic for curtailing debate on college campuses.  “Check your privilege,” a student or teacher will tell a speaker, generally a white male, to convey the idea that his skin color and gender disqualify him from understanding or opining on the issue at hand. 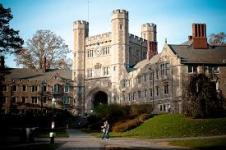 The author of this essay decided to take the injunction literally, and to examine his own “privilege.”  He explains what he found.

Perhaps it’s the privilege my grandfather and his brother had to flee their home as teenagers when the Nazis invaded Poland, leaving their mother and five younger siblings behind, running and running until they reached a Displaced Persons camp in Siberia ….

Or maybe it’s the privilege my grandmother had of spending weeks upon weeks on a death march through Polish forests in subzero temperatures ….

Perhaps it was my privilege that my own father worked hard enough in City College to earn a spot at a top graduate school, got a good job, and for 25 years got up well before the crack of dawn, sacrificing precious time he wanted to spend with those he valued most—his wife and kids—to earn that living.

If the essay had ended at that point, it would have constituted little more than a snappy comeback to those ordering him check his privilege: See, I can claim victimhood just as readily as you can.  But the author’s purpose is not to out-climb his adversaries to higher branches of victimhood.  Rather, his aim is to analyze the true nature “privilege.”  And he does this by first conceding that he has been “exceptionally privileged in [his] life.”

He explains that his “privilege” has been that his grandparents survived and managed to make it to America, where they received the “privilege” of equal protection under the law.  His “privilege” has been the legacy they left his parents, and which his parents in turn imbued in their children, a legacy of valuing family and education.  “It’s not a matter of white or black, male or female or any other division which we seek, but a matter of the values we pass along, the legacy we leave, that perpetuates ‘privilege.’”

He returns to the injunction, and concludes: “I have checked my privilege. And I apologize for nothing.”

The second essay worth reading to assess the atmosphere at America’s institutions of higher learning is entitled “Don’t Donate to Senior Gift.”  The author is a Harvard senior.  A few words of background.  Harvard seniors are encouraged to donate to a class Gift, used to fund the arts, athletics, and financial aid.  Everyone understands that the amount raised from seniors will be small, but the idea is to inculcate the habit of giving back, and, at the same time, to set an example that may encourage older, more affluent alumni to give.

The Harvard essayist reveals that he is a white male who has received full financial aid for four years.  So he sounds like someone who might be legitimately inclined to check his privilege.  But that’s not what he checks.  Because — in his eyes – receiving financial aid has rendered him a victim.  In fact, he considers himself so victimized that he urges his classmates NOT to donate to the Senior Gift.

The first aspect of victimhood identified in the essay is the inconvenience of being solicited for donations.  “By now, we’ve all heard the spiel about Senior Gift,” he writes.

“Donate,” we are urged, even if we can only spare 10 bucks. “Donate,” we are e-mailed, and texted, and Facebook messaged. We are bombarded with reasons to donate….  We hear these braindead megaphones, we become nauseous ….

Second, Harvard suffers from “problematic” ethics.  It has refused to divest itself of its stock holdings in fossil fuel companies.  “Hit them where it hurts and zip up your wallet. Refuse to give them a dime until they divest. They’ll listen.”  The author, having received about a quarter of a million dollars – the cost of four years at Harvard – as a gift, sees no irony in advising his peers to hit his benefactor “where it hurts.”

The author feels entitled to take these critical positions because of how Harvard has treated him:  the University has offended him by requesting that he write thank you letters to his donors for their financial aid.  “I am told that I had better be grateful,” he reports.  “I feel small. And because of Harvard, I do feel like a poor student.”  For good measure, he tells those of his classmates who are “really well off” that “you’re likely guilty of this insensitivity yourself.”

Unlike the Princeton essayist, the Harvard writer finds no privilege requiring checking.  Instead, he sees himself as a victim, of his school’s –and of his classmates’ — “insensitivity.”

Now college is a time to think and explore and express viewpoints, including viewpoints one might come to regret in later years.  Both essayists are intelligent and sincere young men, probably headed to productive, fulfilling, and happy lives.  Presumably, the Harvard senior will one day forgive his alma mater its effrontery in asking him to thank those who made his education possible.  In the fullness of time, he may even condescend to list Harvard on his resume when he goes job-hunting.

But one has to wonder how the two essayists arrived at such different views of privilege and victimhood.  In the first case, the Princeton writer assails the notion of victimhood, by contending that people, however disadvantaged their backgrounds, need only the right set of values to succeed.  In the second case, the Harvard essayist manages to find victim status simply because he has been asked to thank those who helped him.

Perhaps the first author is hopelessly naïve.  But if his worldview is unrealistically optimistic, one wonders how the second writer became so dark and pessimistic.  After all, he has four years of elite college education behind him, and is about to graduate completely debt-free.  How many young people can claim such good fortune?  One might expect at least a glimmer of joy and optimism as he ventures forth into the brave new world of adulthood.  Instead, he graduates feeling “small,” wounded by all the “insensitivity” to which he’s been subjected.

The two writers share many common traits, aside from the superficial similarity of being white males.  They are both enrolled in Ivy League institutions.  They are both intelligent, skillful writers.  They both appreciate the importance of family: the Princeton student describes his father’s dedication, and the Harvard student writes movingly about his mother’s sacrifices.  Yet their world views are a million light-years apart.

One possible – and discouraging – explanation for the divergence is the fact that the Princeton writer is just beginning his college experience while the Harvard writer is finishing.  The three year gap between the end of one’s freshman year and graduation represents a lifetime of exposure to ideas, trends, and philosophies.  Unfortunately, much of that exposure involves teaching students that oppression is omnipresent, and that the highest virtue is victimhood.  And so the educational experience becomes a matter of identifying – usually by race, gender, ethnicity, or some other immutable characteristic – the oppressors and the persecuted.   Naturally, students strive to figure out a way to earn entry into the latter classification.  That may be one reason that the campaign to force universities to divest their holdings in fossil fuel companies has become so popular.  Climate change allows everyone, even white male students, to claim victim status.

If it turns out that their different number of years of exposure to the modern university accounts for their different outlooks, then there is reason for hope that the Harvard essayist will adopt a more positive world view as he progresses through the “real” world.  He may find that an affluent background is no guarantee of success, and that the world really does reward honest, hard work, even from those emerging from poverty.  Who knows?  He may even achieve success and become a donor himself.

But by the same token, the Princeton writer may lose some degree of his optimism.  A New York Times interview with the author reports that “after a year at Princeton, he hoped his views were starting to develop ‘some real nuance.’  ‘I am learning how to learn,’ he said.”

Already?  Given the state of higher education, here’s hoping he doesn’t learn too much too soon.

One response to “A TALE OF TWO ESSAYS”