“There are some ideas so absurd that only an intellectual could believe them,” George Orwell famously said. We can add to that long list of lunacies a theory on freedom of speech and violence articulated by Professor Lisa Feldman Barrett, author of “How Emotions are Made: The Secret Life of the Brain” in last Sunday’s New York Times.

Visiting the troublesome trend on college campuses today to protest, disinvite, and even violently remove controversial speakers, Professor Feldman maintains that the speech-suppressors have a point. Children may believe that “sticks and stones may break my bones, but words will never hurt me.” But Professor Feldman knows better.

…[S]cientifically speaking, it’s not that simple. Words can have a powerful effect on your nervous system. Certain types of adversity, even those involving no physical contact, can make you sick, alter your brain – even kill neurons – and shorten your life. 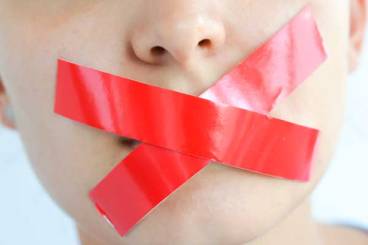 Speech can shorten your life? How? Professor Feldman explains:

Your body contains little packets of genetic materials that sit on the ends of your chromosomes. They’re called telomeres. Each time your cells divide, their telomeres get a little shorter, and when they become too short, you die. This is normal aging. But guess what else shrinks your telomeres? Chronic stress.

Words that stress you out can rub you out, she maintains. Under her theory, the Middlebury mob that attacked Charles Murray and injured Allison Stanger (causing her a concussion) were not engaged in acts of unlawful violence. They were engaged in legitimate self-defense.

To give the professor her due, Barrett stops short of advocating the suppression of all controversial speech. She would allow the airing of views that are “repugnant and misguided,” even those of Charles Murray. But speech that “bullies and torments,” and thereby causes chronic stress, deserves to be banned.

There are many problems with this approach, but the paramount one is that it grants a veto to the listeners’ nervous systems. A century ago, Harvard Law School Professor Zachariah Chafee, Jr. wrote: “Your right to swing your arm ends where the other man’s nose begins.” Today, Professor Barrett tells us: “Your right to freedom of speech ends where the other person’s telomeres begin to shrink.”

The legal philosopher Harry Kalven noted that the First Amendment requires that when speech is of such a nature as to arouse violent reaction on the part of the lawless, the first obligation of government is to maintain the peace and enforce the law, and not to silence or punish the speaker. Otherwise, all speech would be subject to the “heckler’s veto.”

Professor Barrett would replace the heckler’s veto with the hypochondriac’s veto. If you happen to be speaking to a bunch of thick-skinned, shrink-resistant telomere bearers, you can get away with saying anything. But if you’re addressing a bevy of snowflakes whose sensitive telomeres contract at the subtlest whiff of controversy, well then you’d better tread lightly or else you may be charged with attempted homicide.

There is of course an easy solution to the problem of stress-producing speech: Don’t listen.

Nowhere in her essay does Professor Barrett consider the public’s ability to protect their telomeres from shrinking by avoiding speech they find disagreeable. The brave student censors who prevented Christine Lagarde, Ann Coulter, Heather MacDonald, Condoleezza Rice, Ayaan Hirsi Ali, and other scary, stress-inducing women from speaking on their campuses could have protected their delicate telomeres by simply choosing not to attend their appearances. Then, those foolhardy enough to expose their nervous systems to viewpoints with which they might not agree, would have had the option of listening. Instead, the censors’ nerves vetoed the women’s speech.

Those who cherish freedom of speech may well recoil from Professor Barrett’s disturbing defense of censorship. They may wonder how people like that get tenure at universities, and thereby gain the ability to scare their young charges into believing that exposure to controversial ideas may shorten their lives. They may fret over what all this portends for the future of higher education in our society. In short, Barrett’s essay may cause severe stress.

But advocates of freedom of speech – no matter how stressed – should not follow her lead and call for suppression of her views. For that would constitute a betrayal of principles.

4 responses to “SPEECH KILLS: THE LATEST EXCUSE FOR CENSORSHIP”