THIS YEAR IN JERUSALEM

The President of the United States confronted a difficult decision concerning recognition in the volatile Middle East. He was personally sympathetic to the Israeli side.  Many of his closest friends and confidantes were Jews, including some with whom he had participated in business ventures. But now his Secretary of State argued forcefully against recognition. The Secretary’s opposition was shared by almost the entire foreign policy establishment, as well as by the New York Times and the Washington Post. He was warned that if he proceeded with recognition, violence would erupt throughout the Middle East, America’s position at the United Nations would be weakened, and he himself would be accused of pandering for the Jewish vote.

Bucking the advice of his Secretary of State, the President decided in favor of recognition. The Prime Minister of Israel thanked him, and told him that his decision would earn him an immortal place in Jewish history.

These events, as recounted by Clark Clifford, occurred 70 years ago, when the President was Harry Truman, not Donald Trump; the Secretary of State was George Marshall, not Rex Tillerson; the Prime Minister was David Ben Gurion, not Benjamin Netanyahu; and the issue was recognition of the State of Israel, not recognition of its capital. With the benefit of hindsight, most would agree that Truman made the right decision in May of 1948. Donald Trump’s decision to recognize Jerusalem as the capital of the State of Israel — though almost universally condemned by the supposed experts on the region today — ultimately will also be seen as the right move.

One could make a strong case for recognition of Jerusalem as the capital of a Jewish state based on the history and equities of the region. The Jewish claim to Jerusalem dates back 3,000 years, when King David made the city his capital. For centuries, while it lay under the rule of foreign conquerors, Jews continued to dream of a return their ancient capital. The Old Testament mentions the city hundreds of times. “Next year in Jerusalem” is a prayer recited at the conclusion of Yom Kippur services and Passover seders.

In contrast to the Jewish commitment to Jerusalem, during the four centuries – from 1517 to 1917 – when the city was under the Muslim control of the Ottoman Turks, there was no interest in making it any kind of capital. Instead, the city was an unimportant backwater, administered by a provincial officer based in Damascus. Following the end of the British Mandate, the Hashemite Kingdom of Jordan conquered East Jerusalem and maintained control from 1948 to 1967. While under Jordanian control, East Jerusalem was neglected, and there was no effort to make it the capital of a Palestinian state.

During this same period, Jews were denied access to the Western Wall and other holy sites in East Jerusalem. The Jewish cemetery on the Mount of Olives was ransacked and graves were desecrated. In contrast, since 1967 when East Jerusalem was seized by Israel in a defensive war, Israel has demonstrated a scrupulous regard for the rights of Muslims and other non-Jewish people to access their holy sites in the city. Within hours after Israel gained control, Moshe Dayan, Israel’s Defense Minister, handed over administrative authority to the Temple Mount (known to Muslims as the Haram esh-Sharif) to Muslim religious officials, where it has remained ever since. Indeed, Jews are barred, under Israeli law, from praying on the Temple Mount.

Viewing the history and equities of the region, one might well conclude that Israel’s claim to Jerusalem is valid. But President Trump’s decision to recognize Jerusalem as the capital of Israel is an expression of American policy. So rather than weigh the rights and records of the regional players, an objective evaluation of the President’s decision should explore whether it comports with American values and interests.

First, President Trump’s decision to recognize Jerusalem as the capital of Israel complies with fundamental democratic principles. The American people, through their elected representatives, have the right to set national policy including foreign policy. And they have done so. In 1995, Congress passed the Jerusalem Embassy Act. Section 3(a)(2) of the Act states: “Jerusalem should be recognized as the capital of the State of Israel.” Although the Act permits the President to delay actually moving the embassy if “necessary to protect the national security interests,” it does not permit the President to delay recognition.

In his statement on Jerusalem, President Trump did exactly what the law required him to do: he recognized Jerusalem as the capital of Israel. He called upon the State Department to begin the process of hiring architects, engineers, and planners, but he did not set a date for moving the embassy.

It is worth noting that the Act passed in the Senate by a vote of 93-5. It passed in the House by a vote of 374-37. Last June, the Senate, reaffirmed the Act by a vote of 90-0. Its resolution “reaffirms the Jerusalem Embassy Act…, and calls upon the President and all United States officials to abide by its provisions.” In these bitterly partisan days, it is difficult to find any public policy on which Democrats and Republicans agree to such an overwhelming extent as they do on the issue of recognizing Jerusalem as the capital of Israel.

Second, the decision comports with constitutional principles governing the division of labor among the three branches of our federal government. Congress is the only branch empowered to hold hearings, call witnesses, and gather information. It does so in the form of “findings,” which are entitled to deference by the other branches.

When Congress passed the Jerusalem Embassy Act, it made such findings. In evaluating President’s Trump decision, it is worthwhile to recount what Congress found:

(1) Each sovereign nation, under international law and custom, may designate its own capital.

(2) Since 1950, the city of Jerusalem has been the capital of the State of Israel.

(3) The city of Jerusalem is the seat of Israel’s President, Parliament, and Supreme Court, and the site of numerous government ministries and social and cultural institutions.

(4) The city of Jerusalem is the spiritual center of Judaism, and is also considered a holy city by the members of other religious faiths.

(5) From 1948–1967, Jerusalem was a divided city and Israeli citizens of all faiths as well as Jewish citizens of all states were denied access to holy sites in the area controlled by Jordan.

(6) In 1967, the city of Jerusalem was reunited during the conflict known as the Six Day War.

(7) Since 1967, Jerusalem has been a united city administered by Israel, and persons of all religious faiths have been guaranteed full access to holy sites within the city.

These findings form strong grounds for recognizing Jerusalem as the capital of Israel, and for eventually moving our embassy to that city. Now many people, here and abroad, may disagree with these findings. Last May, for example, UNESCO passed a resolution denying any claim by Israel to Jerusalem, and referring to Israel only as the “occupying power.” Doubtless, many American intellectuals, especially academicians in Middle Eastern Studies departments, would support UNESCO’s viewpoint. But American foreign policy must comply with Congressional findings, not with the latest trends in academia.

Under our Constitution, the President’s main duty is to “take care that the laws be faithfully executed.”  President Trump’s decision on recognition was based on these Congressional findings, and was part of his duty of faithful execution. 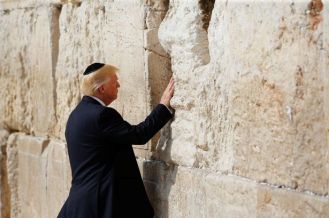 Third, the President’s speech was consistent with America’s tradition of deference to sovereign nations’ right to select their own capital (as referenced in the first Congressional finding). In all of history, the United States has never negated a sovereign nation’s selection of its capital. After World War II, when Berlin was divided into four occupation zones, the communist regime in East Germany (known as the German Democratic Republic or GDR), decided to house its capital in the Soviet zone of the city, in clear violation of the post-war agreement. Nevertheless, the United States deferred to the communists, and established an embassy in East Berlin. To maintain the fiction that the post-war agreement was still in place, the United States described its embassy as its representation to the GDR, rather than in the GDR.

Fourth, President Trump’s decision serves the national interest because it demonstrates to the world that our word is our bond – albeit a bond long delayed in the honoring. Since 1995, the United States has been legally committed to recognize Jerusalem as the capital of Israel. Since then, every American presidential candidate has campaigned for office promising to recognize Jerusalem and to move our embassy there. Once in office, every American president has found some excuse for avoiding that commitment. This omission does not go unnoticed. Our allies who depend on America for their security, and our enemies who carefully monitor signs of vacillation, notice.

What kind of signal does it send to the world when our government, for 22 years, managed to find excuse after excuse to postpone its own pledge to recognize Jerusalem? What effect does it have on South Korea and Japan, as they nervously watch North Korea test nuclear weapons? What effect does it have on Saudi Arabia and the Gulf states, as they see Iran expand its zone of influence through Iraq, Syria, and Lebanon? Even countries that publicly oppose the move are privately reassured when they see that the United States keeps its commitments.

Readers of this blog know that it has freely and frequently criticized Donald Trump. On this issue, President Trump is right. As right as President Truman was 70 years ago.

2 responses to “THIS YEAR IN JERUSALEM”