Although perhaps best known to history as the man who stood up to Hitler, Winston Churchill, an English journalist, warrior, and statesman, also made great contributions to American trademark law. Indeed, Churchill was a pioneer and one of the first proponents of trademark coexistence agreements.

A short primer on trademark coexistence agreements is in order. Trademark coexistence agreements are peace treaties under which the owners of similar marks agree to forgo war and to divide the marketplace instead. The division may relate to goods, with one owner, for example, using its mark on raisins while the other uses its similar mark on oranges. The boundary may be geographic, allowing one party to market products on the West Coast while the other markets on the East Coast. Or the division may involve incorporating subtle distinctions in the marks themselves.

In the case of Churchill—while certainly more modest than saving civilization from Nazi conquest—his major contribution to trademark law involved a trademark dear to his heart: his own name. 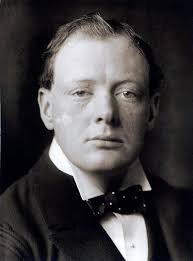 In 1899, the 25-year-old Churchill had already acquired a reputation as an internationally popular author. His Story of the Malakand Field Force was an engrossing account of the uprising in the Northwest Frontier of India. His River War recounted the rebellion of the Mahdi and reconquest of the Sudan. These were campaigns in which Churchill himself played notable parts, and his books made him something of celebrity. He had also published Savrola, a novel of which he was not particularly proud, and which sold poorly.

In the spring of that year, Churchill made an important discovery. As he later recounted in his autobiographical Early Life:

I became conscious of the fact that there was another Winston Churchill who also wrote books; apparently he wrote novels, and very good novels too, which achieved an enormous circulation in the United States. I received from many quarters congratulations on my skill as a writer of fiction. I thought at first these were due to a belated appreciation of the merits of Savrola. Gradually, I realised that there was “another Richmond in the field,” luckily on the other side of the Atlantic.1

This “American Winston Churchill” was indeed a successful author, and a formidable fellow in his own right. At the Naval Academy, he had been a storied fencer and had captained the eight-oared crew. After graduation, he became editor of Cosmopolitan Magazine, before leaving that post to devote himself full time to writing novels. He also harbored ambitions to run for office in his native state of New Hampshire. Suffice it to say that when the English Churchill became aware of the American Churchill, the two young men were on an equal footing, with comparable literary achievements and political aspirations.

The English Churchill immediately recognized that he faced a trademark problem. He was keen to lecture and promote his books in the American market, and he was aware of the public confusion caused by the two men engaging in similar activities under the identical “Winston Churchill” mark. Suing the American Churchill was not an option since, in this country at least, the American Churchill had priority and superior rights to the mark.

On June 7, 1899, the English Churchill sent a letter to his American counterpart noting the trademark problem. Wisely, he did not issue a harsh cease and desist letter. Instead, his tone was friendly and constructive. Writing from London, he began: “Mr. Winston Churchill presents his compliments to Mr. Winston Churchill, and begs to draw his attention to a matter which concerns them both.”2

Then the English Churchill proposed a solution:

Here was a coexistence agreement based neither on products (both Churchills were in the business of producing literary works) nor on geography (both Churchills catered to an Anglo-American market) but on the marks themselves. The addition of “Spencer,” in the Englishman’s view, would create a different commercial impression, sufficient to allay public confusion.

The American Churchill was swift to respond, writing from Windsor, Vermont:

Then the courteous American Churchill went his English namesake one better, offering to consider an additional method of differentiating their marks:

Mr. Winston Churchill moreover, is about to ask the opinion of his friends and of his publishers as to the advisability of inserting the words “The American,” after his name on the title-page of his books. Should this seem wise to them, he will request his publishers to make the change in future editions.6

Although no formal coexistence agreement was drawn up, the English Churchill considered the matter well ended since the parties had agreed in principle: “All was settled amicably, and by degrees the reading public accommodated themselves to the fact that there had arrived at the same moment two different persons of the same name who would from henceforward minister copiously to their literary, or if need be, their political requirements.”7

The English Churchill’s optimistic assessment proved unjustified. In December 1900, he visited Boston as part of a lecture tour. He went straight to the post office to get a packet of letters he was expecting, only to discover that his letters had been misdirected to the American Churchill’s home on Beacon Street. Worn out from a recent illness, the Englishman retired to his hotel to rest, while his tour agent, Major James Pond, went to Beacon Street to recover the letters. There, he encountered the American Churchill, who informed him that the misdirected letters had not yet arrived. Not wishing to disappoint the English Churchill by returning empty-handed, Major Pond prevailed upon the American Churchill to accompany him to the hotel. Upon gaining entry to the hotel room, Major Pond introduced the pair with classic British understatement: “Mr. Churchill. Mr. Churchill.”8

And so the two trademark holders met in person, about a year and half after entering into their coexistence agreement. Their meeting was something of a sensation, making the front page of the Boston Herald under the headline: “Namesakes Meet: Winston Churchills Fast Friends. Not Relatives, However.”9 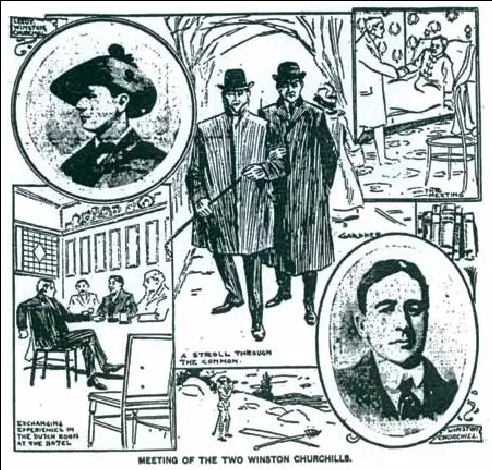 He entertained me at a very gay banquet of young men, and we made each other complimentary speeches. Some confusion however persisted; all my mails were sent to his address and the bill for the dinner came in to me. I need not say that both these errors were speedily redressed.11

Despite the best intentions of the parties, the Winston Churchill coexistence agreement faded into irrelevancy over time. The English Churchill made only a partial effort to comply with his commitment to include “Spencer” in his mark. Instead, he incorporated only the initial. His six-volume history of The Second World War and his four-volume History of the English-Speaking Peoples both bear the author name “Winston S. Churchill.”

If the American Churchill objected to this failure to include “Spencer” in the Englishman’s mark, he never said so. For that matter, the American failed to follow up on his idea of inserting the word “American” in the title pages of his books.

But the main reason the Winston Churchill coexistence agreement withered was, of course, the growing disparity in fame between the two trademark holders. When they met, the English Churchill had fantasized about the two men seeking political fame. “Why don’t you go into politics?” he asked his American namesake. “I mean to be Prime Minister of England; it would be a great lark if you were President of the United States at the same time.”12

Now the prospect of two men with the same name leading the two great English-speaking republics would certainly have increased public confusion, and amplified the need for the coexistence agreement. But it was not to be. After their meeting in Boston, the English Churchill returned to England to take a seat in Parliament, where he would sit, with brief interruptions, for the next 64 years. For much of that time, he occupied cabinet positions, and for about a decade he served as prime minister. The American Churchill also embarked on a political career, but it proved less illustrious. He was elected to the New Hampshire state legislature in 1903 and 1905. That is as far as he got. His lost a race for the Republican gubernatorial nomination in 1906. With the support of his friend Theodore Roosevelt, he received the Bull Moose Party nomination for governor in 1912, while Roosevelt was the party’s presidential candidate. But both men lost.

The disparity extended to their literary careers. Despite the distraction of politics, the English Churchill’s literary production was prodigious, estimated to total some 20 million words. His history of The Second World War, for which he won the Nobel Prize for literature, alone weighs in at 1.6 million words, not counting appendices. Meanwhile, the American Churchill continued to write novels until 1919, when he withdrew from public life to contemplate religion. His writing stopped. When he died in 1947, the world took little notice.

But confusion between the two holders of the Winston Churchill mark lingered in some quarters. This upset Theodore Roosevelt, a longtime friend of the American Churchill, who harbored a very different opinion of the English one. Shortly after the two Churchills met in Boston, the English Churchill took a train up to Albany to dine with the then Governor and Vice President-elect Roosevelt. Churchill did not make a positive impression. “I saw the Englishman, Winston Churchill,” Roosevelt noted to a friend. “[H]e is not an attractive fellow.”13

In 1909, while on a hunting trip in Africa, the then former President Roosevelt wrote a long letter in pencil to his friend Senator Henry Cabot Lodge. Among other topics, Roosevelt referenced novelists whose works were available on that continent. He mentioned the name Churchill then quickly added: “I mean of course, our Winston Churchill, Winston Churchill the gentleman.”14

Coexistence agreement or not, at least one member of the public was not confused as to which Churchill was which, and he was determined to do all he could to prevent confusion among others.

Although the chances of encountering the exact same scenario are slim, this tale of two Churchills does provide some guidance to the trademark practitioner:

· In assessing coexistence agreements, the U.S. Patent and Trademark Office generally defers to the judgment of those actually in the marketplace. But that deference goes only so far. Don’t draft coexistence agreements that merely paper over the likelihood of confusion. Make sure the terms of the agreement really do address the problem.

· Geographic boundaries were once common elements of coexistence agreements. Today, not so much. The internet and inexpensive airfare have made the world a global market.

· Look for possible nongeographic boundaries. Focus on the goods and services, and devise ways to distinguish one party’s products from the other’s. This may require one party to withdraw from one sector of the market.

· If product differentiation won’t work, focus on differentiating the marks. This will not necessarily require abandonment of a mark, but it may require one party changing its mark’s color or font.

· Above all, avoid the litigator’s reflexive temptation to sue first and ask questions later. Often, clients’ needs are better served by negotiating a practical peace than by winning an expensive war. And while the path of negotiation may generate fewer billable hours for lawyers, grateful clients may still say that these were their finest hours.

This article was originally published in Landslide Magazine, Vol. 12, No. 4, March/April 2020, by the American Bar Association.