In the wake of the George Floyd killing, protests have erupted around the world. Now Winston Churchill has been caught up in the maelstrom.

His monument in London’s Parliament Square has been boarded up after protesters daubed “was a racist” in red paint on it. His granddaughter Emma Soames told the BBC that the statue may have to be placed in a museum for its own protection.

The Churchill monument is by no means alone in attracting controversy. Confederate statues have been removed or covered with graffiti all over the South. Statues of Columbus have been toppled or vandalized in Miami, Richmond, and St. Paul. Those actions, whatever one might believe about their propriety, are at least understandable. It is hard to make sense of some of the other statue protests. In Boston, a memorial to the 54th Massachusetts Regiment, the first black volunteer infantry unit in the Civil War, was defaced, and a petition to take down a statue of Abraham Lincoln has attracted 7,000 signatures. In Leicester, England,  a petition to remove a statue of Churchill’s erstwhile foe Mahatma Gandhi has received nearly 5,000 signatures.

One can only say, with Mark Antony: “Mischief, thou art afoot. Take thou what course thou wilt.”

But is the assault on Churchill’s monument mere mischief? Or was he in fact a racist?

In these times of upheaval and uncertainty, an answer of absolute conviction is due. So the only proper response to that question is an adamant: “Yes, but.” 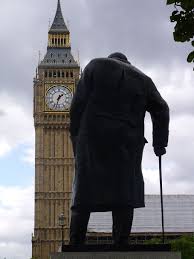