EYELESS (AND CLUELESS) IN GAZA

“Then the Philistines seized Samson, gouged out his eyes and took him down to Gaza.”   Judges 16:21.

Something about Gaza, and the way its Hamas bosses periodically goad  Israel into military action, turn otherwise sensible observers into sightless chumps — incapable of distinguishing between initiating and responding to force, and blind to the difference between attempted murder and self-defense. 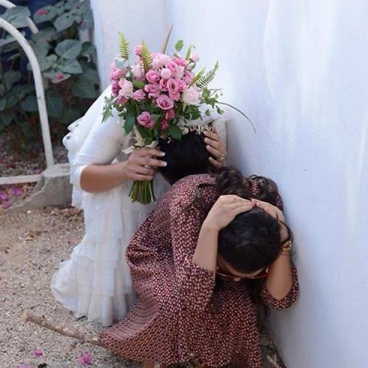 We see that day after day after day in the New York Times, the Christian Science Monitor, CNN, and other mainstream media outlets, which report on the crisis as if it were a contest between two antagonists competing on a morally level playing field.  It appears in the television graphics of careful neutrality: charts showing the number of Israeli air strikes compared to the number of Hamas missiles and mortars; comparisons of the number of casualties on both sides; and reports on the relative suffering of the noncombatants.

This is nonsense.  Three important principles underlie this crisis, which ought to be evident to anyone with eyes to see.   First, there is no equivalence between Israel and Hamas.  Second, inchoate crimes are still crimes, and in wartime, they are war crimes.  And third, “proportionality” has no proper role when thugs are trying to murder your children.

I.   There is no equivalence between Israel and Hamas.

Israel is a democratic state, whose government is elected by its Jewish, Christian, and Muslim citizens.  The rights of those citizens are safeguarded by an independent judiciary, which frequently rules against the government.  An Israeli Arab sits on the Supreme Court; he authored the 2011 decision upholding the rape conviction of a former President of Israel.

Hamas is a terrorist organization dedicated to the destruction of Israel and the Jewish people.  The goal of Hamas is not to end the occupation of Gaza.  That occupation ended in 2005.  The goal of Hamas is not a Palestinian state living side-by-side with Israel.  Its Charter calls for the destruction of Israel – along with, for some reason, the Freemasons, Rotary Clubs, Lions Clubs, and B’nai B’rith. And even after Israel is gone, its mission of killing Jews will go on.  Its Charter reads:

The time [to implement Allah’s promise] will not come until Muslims will fight the Jews and kill them; until the Jews hide behind rocks and trees, which will cry: O Muslim! there is a Jew hiding behind me, come on and kill him!

The Hamas Charter assigns women the “duty of caring for the home and raising the children.”  They are also assigned to “manufacture men” for the war of liberation.  Gays are subject to violent suppression.

The main preoccupation of Israelis is the pursuit of happiness.  They innovate, they work hard, they live as well as they can.  Since 2005, when Israel disengaged from Gaza, its economy has grown by 60%.  Israeli per capita income is $31,000, an astounding number for a tiny state with few natural resources, and with an economy drained by the constant need for military preparedness.

The main preoccupation of Gazans is hate.  When Israel disengaged, it left behind 3,000 state-of-the-art greenhouses, which had generated hundreds of millions of dollars in flowers and agricultural products.  The hope was that their transfer to Palestinian control would help jump-start the local economy.  The Gazans demolished them within hours of the departure of the Israelis – about the same time required to destroy the synagogues abandoned by the Jewish settlers.   The per capita income in Gaza is $2,000.

The principal reason for the economic disparity is that under Hamas, Gazans make rockets, and little else.  In a press release issued in December 2011, Hamas boasted of having fired more than 11,000 rockets at Israel between 2000 and 2011, to have killed more than 1,360 Israelis and to have injured more than 6,400 others.  Since then, it has fired another 2,500 rockets and mortars at civilian targets in Israel.  Trying to murder Jews is the chief industry of Gaza.

The Israeli government has built its Iron Dome missile defense systems and underground shelters to safeguard its citizens from Hamas attacks.  Hamas also builds shelters, but only to safeguard its personnel and weapons.  It does not permit civilian Gazans to use the shelters.  On the contrary, Hamas positions civilians – particularly women and children – near its launchers to deter attacks on them.  As many have noted, Israel uses rockets to protect its children; Hamas uses children to protect its rockets. 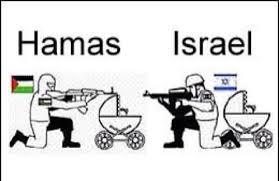 If there is any kind of equivalence between Hamas and Israel, it resides in the fact that both sides possess the power to end the fighting.  Hamas can end the Israeli airstrikes by ceasing to fire rockets and mortars on Israeli civilians.  Israel can end the Hamas attacks – by ceasing to exist.

II.   Inchoate crimes are still crimes, and in wartime, they are war crimes.

If a man fires a gun wildly into a crowd, he commits a crime, whether the bullets hit an innocent bystander or not.  Such actions are considered “inchoate” crimes, because they are incomplete.  But whatever the result, the same repugnant conduct is involved.  Therefore, inchoate crimes are generally punishable, both under international law and under the American Model Penal Code, even if the evil consequence is somehow averted.

The mainstream press invariably reports on the fact that missiles fired by Hamas hardly ever hit their targets, as if incompetence were some kind of mitigating factor.  In fact, every single rocket fired by the Hamas thugs at Israel is a crime, whether it hits its target or not.  It may fall harmlessly onto an open area.  It may be intercepted by Iron Dome.  It may even fall, as many have, back onto Gaza itself.  Still, each rocket is an attempted murder.

To his credit, Ibrahim Kraishi , the Palestinian ambassador to the UN Human Rights Council in Geneva, has recognized the nature of inchoate crimes.  In an interview with Palestinian Authority TV, Ambassador Kraishi said:

The missiles that are now being launched against Israel, each and every missile constitutes a crime against humanity, whether it hits or misses, because it is directed at civilian targets.

The mainstream press, with its preoccupation with calculable carnage, also neglects to take into account the psychological effect of living under constant bombardment.  According to a report by IRIN, a service of the UN Office for the Coordination of Humanitarian Affairs, 75% of children aged 4 – 18 living in the border town of Sderot suffer from post-traumatic stress, including sleeping disorders and severe anxiety.  Symptons include bed-wetting, nightmares, and fear of being alone.  Each child is a victim, even if not sufficiently photogenic to appear in the New York Times.

III.   “Proportionality” has no proper role when thugs are trying to murder your children.

Perhaps the biggest blindspot in the Western media pertains to “proportionality.”  They note the numbers.  Because of the fact that Israel goes to great lengths to protect its civilians while Hamas goes to great lengths to expose its civilians to maximum danger, there is no evenness in the casualties suffered by the two sides.  Many more Palestinians than Jews are dying.  To the sightless, this means Israel must be resorting to disproportionate measures, and that must be wrong.  This attitude was on display when MSNBC’s Andrea Mitchell interviewed Mark Regev, a spokesman for Prime Minister Netanyahu, and led off with this:

The situation is that on one side you’ve got missile defense and on the other side you’ve got civilian populations and people dying in large numbers. How long can you politically withstand the pressure for a cease-fire?

Implicit in her question was the notion that if Israel is inflicting more casualties than it is suffering, it must be doing something wrong.  It must be responding disproportionately.  Therefore, it will and ought to be subjected to political pressure.

Perhaps the best way to see through this moral miasma is to imagine a mother at home at night with her children.  Outside is a gunman.  Intermittently, the gunman fires into the home.  The house is large and dark, and the gunman fails to hit a human target.

Now imagine the mother frantically calling 911 for help.  The policewoman answering the call – let’s call her “Andrea”, just to pick a random name – asks her how many gunmen are outside.  When the mother answers that she believes there is one deranged assailant outside, Andrea replies:   “In that case, we’ll send one policeman over to help you.”  The distraught mother begs her to send the largest squad available: ten men, twenty, one hundred.  And a SWAT team.  Her children’s lives are threatened.  Andrea asks: “Do you really want such a disproportionate response?   Aren’t you overreacting?  How will you withstand the pressure  from your neighbors?”

Israel’s children are in the paths of the missiles fired from Gaza.  Its government has the right – in fact, it has the duty – to do whatever it takes to stop those missiles.  Proportionality has no place in calculating a response.

It is not always easy to recognize the obvious in the fog of war.  But those reporting on events from a safe distance have an obligation to exercise some modicum of moral judgment and common sense.  Observers who convey the notion that the current crisis is a contest between equals; or who minimize the criminality of firing rockets at civilian targets because those rockets usually miss or are intercepted; or who expect the Israeli military to ratchet down its response to somehow equalize the casualties on both sides of the conflict — all such observers are clueless, exhibiting blindness of truly biblical proportions.

4 responses to “EYELESS (AND CLUELESS) IN GAZA”