In the wake of the Paris massacre, the French government issued a poster designed to prepare and protect its citizens against new terrorist attacks. The poster gives advice revolving around the triptych “escape, hide, alert.” 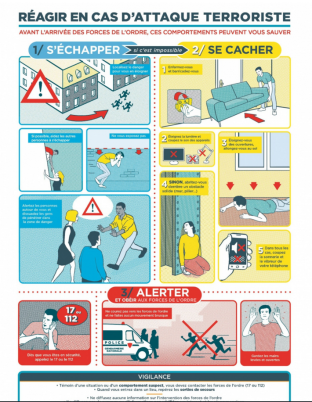 The City of Houston has issued a video dealing with the same subject. Like the French poster, it advises office workers to escape or hide. But it includes a third imperative, absent from the French poster. The title of the Houston video is: “Run. Hide. Fight.”

In the video, actors portraying office workers huddle in a break room. The killer is outside and there is no way to escape. One worker picks up a fire extinguisher, another grabs a chair, two others hold a belt and a coffee mug. When the shooter begins to enter, the workers attack him. As the video frame freezes, the narrator intones: “As a last resort, if your life is at risk, whether you’re alone or working together as a group, fight! Act with aggression. Improvise weapons. Disarm him. And commit to taking the shooter down, no matter what.”

While the recent spate of mass killings has sparked debates on gun control and immigration, surprisingly little has been written about fighting back.

The difference between the French and Houston instructional materials is more than theoretical. That difference was on actual display last August during the Thalys train attack. Three American passengers rose from their seats and overpowered the heavily-armed gunman. The French train crew  locked themselves in the engine room. The Americans were hailed as heroes and the French crew criticized as cowards. But to some degree, the two responses simply reflected different approaches to how one should respond to a terrorist attack.

Often, fighting back is not realistic. In the San Bernardino massacre, the two murderers, dressed in tactical gear and armed with semiautomatic rifles and pistols, entered a conference room which had been rented out for a Christmas party. There were about 100 attendees. The shooters killed or wounded 35, then fled. The entire attack lasted only two or three minutes. Fighting back was not a realistic option.

But in other incidents, resistance may be possible. In the attack on the Bataclan concert hall in Paris, for example, three gunmen entered a sold-out venue seating 1,500 people. Counting the musicians, technicians, and staff, the ratio of potential victims to attackers was well over 500 to 1. The attack took place over the course of two hours, during which time the killers stopped repeatedly to reload. Survivors described them as “calm” and “determined.”  Resistance powered by sheer weight of numbers might have been possible, and might have saved lives.

Needless to say, it’s much easier to theorize about fighting back when one is safely writing at one’s desk, than when one is present in hell, experiencing the unspeakable horror of heavily armed men dealing death and destruction. Fear and paralysis are understandable reactions.

But instead of just lighting candles and holding prayer sessions,  why not also explore whether the general public should be encouraged to consider physical resistance as one response to terrorist attacks?

There are societies where fighting back is  expected. In Israel, nearly every citizen, male and female, serves in the military; service in the reserves extends for most men into their 40s.  Guns are everywhere. If you’re standing in line at a pizza parlor, you’re as likely to be jostled by a teenager carrying a rifle as one wearing a backpack. Perhaps because of this nearly universal military training, and the prevalence of guns, many if not most terrorist attacks are stopped by civilians at the scene. No terrorist attacking an Israeli target expects to have the time to calmly reload that the Bataclan concert hall killers did. On the contrary, terrorists planning attacks in Israel do so with the certain knowledge that they will be dead very soon after they commence their attack.

The Israeli approach is not just a matter of military experience and weapon availability. It is also a matter of mindset. Just as the nation expects to fight its wars on its own, without help from the outside, Israeli citizens expect to fight terrorists on their own, individually, without immediate assistance from the authorities.

It is no coincidence that the first victim of 9/11 was Danny Lewin, an American-born Israeli aboard American Flight 11. Based on radio communications with the flight attendants before the plane slammed into the World Trade Center, we know that Lewin tried to stop the hijackers. They slashed his throat. But he died fighting, not passively.

So did the passengers on United Flight 93. After the 9/11 terrorists murdered the cockpit crew and took control of the craft, passengers with cellphones learned of the jets that had been flown into the World Trade Center and the Pentagon earlier that morning. They understood their predicament.  Led by Todd Beamer (“Let’s roll”), they stormed the cockpit and forced the plane to crash into an empty field in Pennsylvania, just twenty minutes flying time from its intended target, believed to be either the White House or the Capitol.

We honor men like Danny Lewin and the passengers of United Flight 93. But their actions were not mere machismo. Given their circumstances, they acted rationally. Lewin, by the way, was a math genius and the co-founder of Akami Technologies. Possibly, he decided to fight because he understood that it was the only logical course of action.

Some Second Amendment advocates call for the wider distribution of guns to empower ordinary citizens to fight back. Gun control advocates contend that making weapons more available will make it easier for terrorists to obtain them, and will lead to more, not fewer, mass shootings. There are legitimate arguments on both sides. In our federal system, where many such decisions are made at the state and local level, it makes sense to try out different approaches, and then to evaluate which works better.

But regardless of the outcome of the gun control debate, the option of fighting back – with whatever weapons may be available – should be discussed and prepared for. Three days after the San Bernardino attack, a man knifed two passengers in the London Underground, in an incident which the authorities are treating as an act of terrorism.  More attacks, and more mass killings, are almost a certainty.

First, as a society, we should recognize resistance as one possible response to a terrorist attack: certainly whenever escape or concealment are not viable options. Even when they are, resistance may still be the best course when, as on the Thalys train, there is a good chance of success. Recognizing resistance as a possible response means training ordinary citizens. It means teaching office workers and students, concert goers and diners, how to band together and organize, and how to fashion weapons from whatever objects are close at hand.

Second, we should recognize and deal with the unpleasant reality that the responsibility for protecting the citizenry falls upon the citizens themselves, at least initially. The police cannot be everywhere at all times. We the people are the targets in this war, and we the people have a civic duty to learn how to protect ourselves.

Third, and finally, we as a society should honor and ennoble those who fight back, whether they survive or not. Heroes elevate ordinary people. Learning about heroic acts encourages us to believe that we are capable of heroic acts ourselves. In addition to training, in addition to recognizing our responsibility to protect ourselves, we will need courage in the days ahead. Having heroes to admire is one way to generate that courage.

5 responses to “FIGHTING BACK”