MESSING WITH THE MIKADO

The latest battleground in the never-ending struggle of the social justice warriors to reform mankind is Titipu. Yes, the same Titipu from which Nanki-Poo, son of the Mikado of Japan, fled to escape marriage to the domineering Katisha. And yes, the Nanki-Poo of whom we speak is the same swain who fell in love with the gentle maiden named Yum-Yum, the ward of Ko-Ko, the Lord High Executioner.

Gilbert & Sullivan’s Mikado ran for 670 performances following its 1885 London debut, and has been performed continuously ever since in theaters around the globe.  This summer, San Francisco’s Lamplighters will present a very different version of the gem. Instead of Japan, the setting will be Renaissance Italy. The switch follows pressure from local activists who asserted two contradictory criticisms. 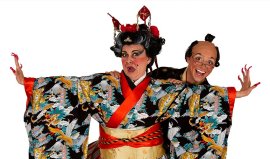 The activists seemed unaware of the schizophrenic nature of their indictment — demanding more Asian actors to perform roles deemed degrading to Asians. Their inconsistency is reminiscent of the Puritanical criticism of modern cinema: “Movies today are pornographic … and ticket prices are so high!”

Inconsistent or not, do the criticisms have merit?

Let’s turn first to the charge of racism. Does the show insult the Japanese people and culture? Certainly, some Westerners have feared so. In 1907, the British government banned public performances of the musical for six weeks, so as not to offend the visiting Prince Fushimi Sandanaru. In 1947, General Douglas MacArthur banned performances in occupied Japan.  But on both occasions, the bans were more a matter of Western than Japanese sensitivity. Prince Fushimi actually complained about the ban because he had been looking forward to seeing the show. And following the end of MacArthur’s censorship, The Mikado has been frequently performed in Japan without protest.

The criticism of The Mikado as racist resembles similar criticism about the Washington Redskins trademark. Those protesting the mark turned out to be almost entirely non-Indian.  A recent poll revealed that 90% of American Indians have no objection to the symbol.  Similarly, while production companies in both America and Great Britain have bowdlerized Mikado performances to remove the Japanese setting, there is no record of any Japanese performance company ever doing so.

That may be because the Japanese, more than the Western PC police, understand that The Mikado is not about Japan. It is about England. The plot revolves around an edict by the Emperor making flirting a capital offense. (“So he decreed in words succinct, that all who nodded, leered, or winked, unless connubially linked, should forthwith be beheaded.”) This, of course, was a satire on Victorian prudishness.

In case anyone is dense enough to be confused, the opera repeatedly makes it clear that the performers on stage are snobbish Englishmen, not Japanese. When the curtain rises, the players face the audience and announce:

If you want to know who we are,

We are gentlemen of Japan….

We figure in lively paint,

Our attitude’s queer and quaint.

You’re wrong if you think it ain’t.  Oh!

This gets a laugh because the characters on the stage, with their manners and slang,  are so clearly not  gentlemen of Japan.  They are quintessentially English characters, letting the audience in on a joke, a pretense which recurs throughout the opera. When Ko-Ko announces that he has found a volunteer to fulfill the Mikado’s order that someone be executed for violating the anti-flirting edict, the company cheers: “The Japanese equivalent of hear, hear, hear!” And when the noblemen apologize to the Emperor for failing to recognize his son, they explain: “It wasn’t written on his forehead, you know…. It might have been on his pocket-handkerchief, but Japanese don’t use pocket-handkerchiefs!”

Still, PC proponents might argue, if the ridiculous figures on stage are actually Englishmen, why not place the story there? Or in Renaissance Italy? Why situate their pomposity in Japan?

The answer is because for Gilbert and Sullivan, and their Victorian contemporaries, Japan was the moon. A distant, intriguing, exotic world. The whole point of the satire was to portray English foibles in a completely alien, un-English setting. Today, Japanese and Western teenagers wear the same Levi’s, and listen to the same music. So a plot placing Englishmen in a Japanese setting wouldn’t work.  No one would find it funny. But for 1885 Englishmen, seeing their peculiarities reflected in a Japanese glass was a hoot.

If we want to truly appreciate Shakespeare, we listen to the same language he used, even though the jargon is sometimes difficult for the 21st century ear to follow.  We do not (as some misguided souls have urged) convert it into modern English. If we want to truly appreciate Gilbert & Sullivan, we need to watch their antics in the same setting they considered fantastical. Renaissance Italy was not such a place.

Let’s turn to the second complaint. The PC activists say that The Mikado’s supposedly Asian characters must be played by Asian actors. This raises a more complex issue.

There is, admittedly, some validity to the notion that certain roles belong to certain races. For example, Key & Peele perform a hilarious sketch about racist zombies, creatures who prey upon only white victims, and who discreetly avoid (and prod their zombie children to avoid) black people fleeing from them. The skit works only because Key and Peele are African-American.

But most art, including comedic art, is not about race. It is about universal traits, such as pomposity, mistaken identity, and unrequited love. Most art neither imposes nor recognizes racial barriers.

The Mikado is an example. In 1939, the musical was produced by Mike Todd, under the title The Hot Mikado, with an all-black cast, featuring Bill “Bojangles” Robinson in the title role. It ran on Broadway, and then ran for two seasons as one of the most popular attractions at the New York World’s Fair. The idea of arrogant, obviously non-Japanese characters pretending to be Japanese, worked as well with African-American players as it did with Englishmen

For most art, whether comedic or serious, is not racially insular. Long before he became famous as the voice of Darth Vader or CNN, James Earl Jones was a staple of New York’s Shakespeare-in-the-Park festival. He played MacBeth, although he is not Scottish, and he played Shylock, although he is not Jewish. He played Othello, of course, but because he excelled at exuding that character’s innocence, paranoia, and tragedy, not because of his black skin color.

Ko Ko, Nanki-Poo, Yum Yum, and all the other wonderfully ridiculous inhabitants of Titipu, are supposed to be Asian, the critics say. And they are right. But Asia is  a mighty big continent, including not only Japanese, but also Chinese, Indians, Turks, and hundreds of other ethnicities. Ko Ko, Nanki-Poo, and Yum Yum are Asian, but they are also Australian, European, and American (North and South). They are whatever nationality we choose to assign to silliness and vanity, which means they are any and all nationalities.

In the story, Ko Ko, the man charged with enforcing by death the Emperor’s ban on flirting, explains that “if someday it should happen that a victim must be found, I’ve got a little list. I’ve got a little list.” He goes on to list all sorts of “society offenders who should well be underground, and who never would be missed. They never would be missed.” In performances, the list is constantly updated to keep it current and funny.

It would be fitting to add: “The pestilential nuisances who institute PC.”

Well, I don’t think they’d be missed. I’m sure they’d not be missed.

4 responses to “MESSING WITH THE MIKADO”