OF MONSTERS AND MISJUDGMENTS

Let us begin with the indisputable. Larry Nassar is a monster. So it’s not surprising that Judge Rosemarie Aquilina, who sentenced him to 40 to 175 years in prison, has been universally cheered. On the right, Fox News’ Andrew Napolitano has called her style of administering justice “nothing short of heroic.” On the left, feminist fans have proposed her for Person of the Year, or even for the Supreme Court.

But while Larry Nassar is a monster, our legal system is designed to protect the procedural rights of monsters. For without such protection, there is no guarantee that the same rights will be available to help the innocent. 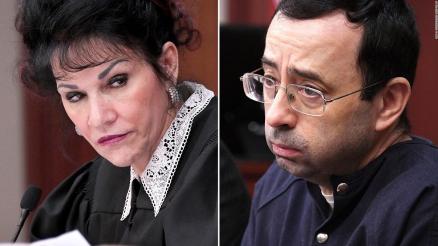 For that reason, anyone concerned with due process must view with deep unease the manner in which Judge Aquilina handled the sentencing of Larry Nassar following his guilty plea for molesting seven girls.

Judge Aquilina properly heard testimony  from the seven, and from 161 other victims whose testimony enhanced the credibility of the seven. But instead of hearing the evidence objectively, as a fact-finder is supposed to do, Judge Aquilina shed the role of judge and became, in the words of the New York Times, a “fierce advocate” for the victims. Needless to say, the victims were entitled to have a fierce advocate. But they already had one. Her name is Angela Povilaitis, and she was the prosecutor in the case. For that matter, Larry Nassar was also entitled to have a fierce advocate. He too had one. Her name is Shannon Smith, and she was Nassar’s defense counsel.

With those advocates present in the courtroom, there was no justification for Judge Aquilana to serve as an advocate. Her role was to adjudicate, not advocate.

But advocate she did.

Before sentencing, as the victims testified, she could not resist the urge to discard her judicial persona and adopt the role of therapist. “I wish my robe came with a magic wand so I can wave it over your and heal you,” she told one victim.

She told another: “The monster who took advantage of you is going to wither away, much like the scene in the Wizard of Oz where the water gets poured on the witch and the witch withers away.” These remarks were made before she actually sentenced Nassar, while she was supposedly listening to the evidence objectively so that she could determine the legally proper level of punishment. 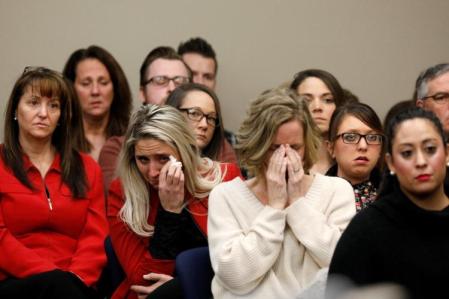 She told another victim: “The constitution does not allow for cruel and unusual punishment. If it did, I have to say, I might allow what he did to all of these beautiful souls – these young women in their childhood – I would allow someone or many people to do to him what he did to others.”

What did Judge Aquilina mean by these remarks? It’s hard to escape the conclusion that she meant that Larry Nassar deserves to be gang-raped in prison, and that she herself would favor such treatment but for the inconvenient barrier of the Bill of Rights. Now, no one would blame the victims or their parents for harboring such vindictive sentiments. But for a judge to give them voice, and to do so in open court while weighing the evidence relevant to sentencing, should disturb anyone who cares about due process.

Judge Aquilina described her sentence of 40 to 175 years as a “death warrant.” Imposing a death warrant on a fellow human being – even on one as monstrous as Nassar — should be a solemn awful act. But Judge Aquilina fairly embraced the role, calling it “an honor and privilege.”

How would we feel if a prison official, charged with pulling the switch to an electric chair or performing a lethal injection, described his job as “an honor and a privilege.” We would probably fire any such executioner, or reassign him to other tasks better suited to his temperament.

But the most disturbing words uttered by Judge Aquilina during the sentencing were these:

Exactly what stops now? From her words, it appears Judge Aquilina believed that imposing a heavy sentence on Nassar would stop the sexual abuse of 400,000 other victims. Nassar certainly deserved to be punished for molesting the seven women covered by his guilty plea. But Judge Aquilina stepped out of bounds when she evoked the imagined plight of thousands of other victims to justify her sentence.  That is not how the criminal justice system is supposed to work. We do not countenance the notion of collective guilt. Nassar deserved to be punished for the crimes he committed, not for the crimes that other sex offenders have committed or may commit in the future.

To find fault with Judge Aquilina is not at all to exonerate Larry Nassar. On the contrary. Nassar, ironically, may become the beneficiary of the Judge’s penchant for substituting her personal values for judicial objectivity.

Consider the case of Jim Bakker, the crooked televangelist. In 1989 he was convicted of wire and mail fraud. In handing down a 45-year sentence, federal Judge Robert Potter was as outspoken in his sense of moral indignation as Judge Aquilina was in her sentencing of Nassar. Judge Potter stated: “[Bakker] had no thought whatever about his victims and those of us who do have a religion are ridiculed as being saps from money-grubbing preachers or priests.”

Courts … cannot sanction sentencing procedures that create the perception of the bench as a pulpit from which judges announce their personal sense of religiosity and simultaneously punish defendants for offending it…. Regrettably, we are left with the apprehension that the imposition of a lengthy prison term here may have reflected the fact that the court’s own sense of religious propriety had somehow been betrayed.

Instead of 45 years, Bakker ultimately served only four years in prison.

Some admirers have focused on the fact that Judge Aquilina is a woman, as somehow key to her performance in the case. In this age of identity politics, such observations are probably inevitable. If gender is relevant, then it is worth noting the remarks of a different woman, Judge Kimba Wood, who sentenced Michael Milken in 1990. Milken had made a fortune in junk bonds in the 1980s. A number of savings and loans associations had failed, inflicting massive financial harm on millions. Many people wrote letters to Judge Wood, urging her to punish Milken harshly, not just for the proven consequences of his own actions, but for all the economic harm attributable to others of his ilk. Judge Wood responded to these entreaties:

The letters reflect a perception that we as a society must find those responsible for the alleged abuses of the 1980’s, economic harm caused savings and loan associations, takeover targets and those allegedly injured by the issuance of junk bonds as well as by insider trading and other alleged abuses, and punish these criminals in proportion to the losses believed to have been suffered. These writers ask for a verdict on a decade of greed.

While I sympathize with the anxiety expressed in these letters, the suppositions upon which these views are based cannot enter into sentencing defendant on the six counts of wrongdoing to which he pled guilty. Our system of justice protects everyone from being sentenced on supposition and it is this court’s responsibility to insure that defendant receives that same protection here.

Her sentence was long (ten years, later reduced), but it was based solely on the consequences of the conduct for which Milken had pled guilty. Judge Wood did not allow her sentence to be formed by her personal sentiments, nor did she intermix Milken’s guilt with the misconduct of others. She may not have earned the public acclamation received by Judge Aquilina, but her performance provides a far better model of judicial conduct.

2 responses to “OF MONSTERS AND MISJUDGMENTS”