A RADICAL WASTE OF MONEY

As widely reported in the press (see here, here, and here), Angela Davis has decided to donate her papers to Harvard University’s Schlesinger Library. Well, not exactly “donate.” The long-time Communist Party member has overcome her distaste for free market forces and sold her papers for an undisclosed sum of money. Harvard alumni might well ask: Is this how we want our contributions spent?

Despite the gushing and gullible references to her as a “civil rights icon,” Davis has devoted most of her adult life to championing the forces of violence and repression.

She achieved fame of a sort in 1970, when she was arrested and tried for murder, kidnapping, and conspiracy in connection with a botched escape attempt in Marin County Superior Court. At the time, Davis was romantically involved with George Jackson, who was serving a sentence for armed robbery and who was also facing charges of murdering a prison guard in Soledad Prison. He and two other defendants in that case were known as the Soledad Brothers.

Jackson’s younger brother Jonathan attempted to kidnap hostages to bargain for the release of George and the other Soledad Brothers. He entered the courtroom of Judge Harold Haley, where the trial James McClain was underway for the murder of a prison guard. In those innocent days before metal detectors, Jonathan was able to enter the courthouse with a small arsenal of concealed weapons. He was the only one in the courtroom armed. Judge Haley, the father of twin daughters, did not allow his court officers to carry guns because he considered them “offensive to the public taste.” Brandishing a weapon, Jonathan rose, halted the proceedings, and armed McClain and two other convicts who were in the courtroom waiting to testify. The four men then proceeded to take Judge Haley, the prosecutor Gary Thomas, and three women jurors hostage. 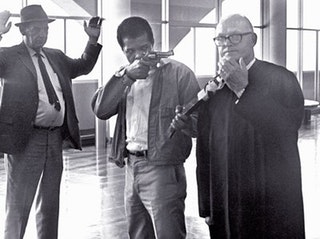 They taped a sawed off shot gun under Judge Haley’s chin, and herded him and their other hostages into a waiting van.  When the van was stopped by sheriff’s deputies at a roadblock, the kidnappers shot the Judge, blowing half his head off. Gary Thomas, the prosecutor, managed to grab a gun from the driver and tried to shoot the kidnappers. The deputies, hearing gunfire within the van, opened fire. When it was over the prosecutor suffered a gunshot wound to the back, which left him paralyzed for life. One woman juror was shot in the arm. Three kidnappers were killed and one wounded.

Two of the weapons used in the bloody escape attempt, including the shotgun used to obliterate Judge Haley’s skull, were purchased by Angela Davis. When a warrant for her arrest was issued, she went into hiding. She was captured in New York three months later.

In the run-up to her trial, Angela Davis became an international celebrity, and “Free Angela” became a chic slogan, adorning posters and tee-shirts. Sympathetic commentators, especially in communist countries, portrayed George Jackson as a political prisoner. Her defense team claimed that she had purchased the guns to guard the Soledad Brothers’ defense headquarters.

In its story on the “donation” of the Davis papers, the New York Times was quick to remind its readers that Davis was “acquitted of all charges by an all-white jury,” implying, in this age of identity politics, that if even white people considered her innocent, then she must certainly be so. In fact, Davis’ extensive defense team – which included psychologists and hand-writing experts – succeeded in obtaining an ideal jury of liberal and ultraliberal Northern Californians, enthralled with her celebrity status and receptive to her team’s message of racial injustice. The jury foreperson was a noted anti-Vietnam War activist. One juror waved a clenched-fist salute to Davis supporters outside the courtroom. Ten of the 12 jurors attended a defense team champagne party to celebrate the acquittal. A contemporary Los Angeles Times story bore this headline: “From Moment it Approved Jury, Defense Was All but Certain of Acquittal.”

So, yes, Angela Davis was acquitted. So was O.J. Simpson.

In the years following the trial, Davis continued to attach herself to infamous causes and people.

In 1973, she met and fawned over Yasir Arafat. This, just months after the Munich Massacre of the Israeli Olympic Team, which was carried out by Black September, a wing of Arafat’s Fatah group.

That same year, she traveled to East Germany, to be honored by communist boss Ernest Honecher, whose standing order to shoot anyone trying to cross the border into the West led to the deaths of over 1,000 Germans.

In 1977, she lionized Jim Jones as a “friend” and fellow “fighter for justice.” For those too young to remember, Jones was a megalomaniac who established a collectivist commune in Guyana. In 1978, when investigators led by Congressman Leo Ryan arrived at the camp, Jones ordered them ambushed and killed. Then he led his followers in a macabre suicide-murder pact, during which they either willingly ingested a poison-laced punch, or were forced to do so at gunpoint.  Jones and 909 members, one third of them children, died.

In advocating prison reform, Davis maintained that any black person serving a prison sentence in the United States is a political prisoner, due to our supposed endemic racism. But throughout the Cold War, she never once criticized the Soviet Union for imprisoning hundreds of thousands of political prisoners. Instead, she called such prisoners “common criminals,” and supported the Soviet invasion of Czechoslovakia.

According to Nobel Prize winner Alexandr Solzhenitsyn, when a group of Soviet and Czech dissidents approached her during a visit to the USSR, and implored her to intercede on behalf of imprisoned Czech political prisoners, she replied: “They deserve what they get. Let them remain in prison.” In return for her slavish defense of the Soviet Union’s repressive policies, she was awarded the Lenin Peace Prize.

She is a virulent critic of Israel, whom she condemns as an “apartheid” state.  Since 2011, she has been an outspoken supporter of the Boycott, Divestment, and Sanctions (BDS) movement, which seeks to isolate Israel economically, socially, and academically from the rest of the world. The BDS movement is committed to blocking Israeli professors from visiting American universities and collaborating on research. Ironically, if her BDS preferences were to prevail at Harvard, then Israeli academics would be barred from studying her papers.

Henry Louis Gates Jr., the director of Harvard’s Hutchins Center for African & African American Research, called Professor Davis ”one of the major political theorists of the second half of the 20th century,” adding: “Whether one agrees with her opinions or not, there’s no gainsaying her prominent place in the history of American political thought.”

Professor Gates is right. There is no gainsaying the prominent role played by Angela Davis. She deserves to be studied – as do Ernest Honecher, Leonid Brezhnev, Jim Jones, Yasir Arafat, and others whose deeds darkened the second half of the 20th century. Perhaps her career should be studied in a course exploring how easily liberal institutions can be seduced into adoring proponents of violence and totalitarianism.

But this does not mean that she or other such proponents should be financially enriched.

Harvard will not disclose how much it has paid Angela Davis for her “donation.” It should. Supporters of the University should demand to know. At this stage, it may be too late to unwind the transaction. But it is not too late to insist on some measure of atonement, perhaps by granting an equal sum to another scholar, someone who has devoted her life to promoting the values of liberty, freedom of speech, tolerance, and the rule of law – all values which Davis vehemently opposed in her long and discreditable career.

One response to “A RADICAL WASTE OF MONEY”