CULTURAL INTEGRATION AND ITS DISCONTENTS

“Cultural appropriation” is the latest vehicle for those thumbing a ride to victim status. Unlike Black Lives Matter or the #MeToo movement, one needn’t have experienced injustice or discrimination to sign up. Practically anyone, from any culture, may proclaim his, her, or their victimization.

The most common definition of “cultural appropriation” is: The act of taking or using things from a culture not your own, especially without showing that you respect or understand it.

Now some cultures – those that sanction slavery or female genital mutilation, for example – deserve disrespect.  But as a general rule, showing disrespect for or lack of understanding of another culture deserves condemnation. Still, many of the most recent examples of alleged cultural appropriation suggest that those complaining most loudly have the least understanding of the cultures they purport to defend.

Students at Oberlin College, for example, recently protested the serving of General Tso chicken in the cafeteria as denigrating Chinese culture. Among other complaints, students were unhappy that the food service company served steamed rather than fried chicken. “When you’re cooking a country’s dish for other people, including ones who have never tried the original dish before, you’re also representing the meaning of the dish as well as its culture,” one student said. “So if people not from that heritage take food, modify it and serve it as ‘authentic,’ it is appropriative.”

As usually happens at colleges these days, the school administration immediately confessed guilt and prostrated itself before its students. Michele Gross, Oberlin’s director of dining services, apologized that “in our efforts to provide a vibrant menu, we recently fell short in the execution of several dishes in a manner that was culturally insensitive.”

She probably should have said “culturally ignorant.” For although General Tso chicken is named after a Qing dynasty military leader, the dish itself has nothing to do with Chinese culture.

According to Chinese cuisine writer Fuchsia Dunlop, the dish was invented in New York City in 1973 by Peng Chang-kue, who fled to Taiwan during the Chinese Civil War, and emigrated to the United State years later.  There, on East 44th Street – not exactly the seat of Chinese culture — General Tso chicken was first prepared and served. Peng achieved (or, should we say, “appropriated”) the American dream. He became a successful restaurateur, and even tried to open an establishment featuring General Tso chicken in Hunan Province, the birthplace of General Tso. But, unlike Americans, the local Chinese didn’t like it and the restaurant failed.

Peng, by the way, is not the only claimant to inventorship. T.T.Wang, another Chinese emigre chef, is reported to have first served General Tso chicken at New York City’s Shun Lee Palaces, located at 155 East 55th Street and 43 West 65th Street, two other seminal sites of Chinese culture.

Regardless of who the true inventor is, General Tso chicken turns out to be no more an example of cultural appropriation than are bagels, kielbasa, or pizza.

Protests over dreadlocks are similarly divorced from fact. Social justice warriors object that white people who wear them are ripping off African culture. In fact, depictions of dreadlocks date back 3600 years to Minoan civilization in ancient Greece.  While dreadlocks are associated with the Maasai and Turkana cultures of Africa, they also appear among ancient Christian ascetics, Muslim dervishes, indigenous Australians, and  many others.

While we’re on the subject of “African” culture, it’s worth pointing out that Africa is a continent, not a culture. It comprises 54 different countries whose inhabitants speak 1,500 to 2,000 separate languages. To lump all of these variegated and distinctive societies into the catch-all category of “African” culture, as social justice warriors habitually do,  is truly insulting – to Africans. Borrowing a page from the servile Oberlin official, it is “insensitive.”

Claims of cultural appropriation have metastasized from the factually incorrect to the inherently absurd.

Male drag queens have recently accused females performing as queens of cultural appropriation, ostensibly because only males can appreciate the “danger and irony” involved in dressing as women.  Critics have accused Wes Anderson of cultural appropriation because in casting voices for his Isle of Dogs animated movie, he chose mostly white males for the dogs and Asians for the humans. This was deemed insensitive to Asians.

These are just a few examples of risible protests of cultural appropriation. Many more could be cited. But they  illustrate the shallowness of the movement.

Genuine cultural appropriation – as opposed to the ersatz version bandied about today  — has occurred throughout history, and still exists today.

In 1812, for example,  Lord Elgin, the British ambassador to Greece, removed statues and friezes from the Acropolis and other temples, and shipped them to England. Known as the “Elgin Marbles,” they have remained there ever since. Apologists point out that he did so with the permission of the local authorities, but those authorities were the Ottoman conquerors of Greece, who were hardly in a position to speak for the Greeks. In 1897, the British launched a punitive expedition against the African kingdom of Benin. They looted 3,000 bronzes, carved ivory tusks, oak chests, and other priceless articles.

These travesties may be correctly labeled cultural appropriation because the appropriators deprived their victims of valuable portions of their cultural heritage. When the misdeeds were done, the victims were the poorer for them.

But other events of that same period deserve attention because they illustrate what cultural appropriation is not.

About the same time Lord Elgin was removing the Elgin Marbles, Sir Robert Smirke was designing the British Museum in the Greek Revival style. The building’s South entrance includes columns and a pediment based on Greek architecture. Across the Atlantic, Americans were building the U.S. Capitol, designed to evoke an ancient Roman temple.

If those things happened today, the architects of the British Museum, the U.S. Capitol, and hundreds of other graceful embodiments of Greco-Roman style might be deemed cultural appropriators for using treasures from cultures not their own.

But cultures are not property. Their use by newcomers does not impoverish the members of the society which engendered them. The incorporation of Greco-Roman architecture by 19th century Westerners was not theft. It was homage.  It illustrates how ideas and innovations diffuse among societies in a process of cross-pollination that promotes progress.

Those baying today about cultural appropriation believe that any use of one culture’s achievements by those of another culture represents theft – especially if the users have a lighter skin. But cultural cross-pollination is not a zero-sum game. Just the opposite.

Elvis Presley’s adoption of rhythm and blues exposed millions of white teenagers to black musicians in an era of widespread segregation. His music created a cultural bridge that helped end that segregation. Yes, Presley’s “appropriation” of rhythm and blues enriched him (and his record companies). But that enrichment did not come at the price of impoverishing black musicians. On the contrary, it enlarged their audience, as more white listeners grew interested in them. Little Richard said of Elvis: “He was an integrator. Elvis was a blessing. They wouldn’t let black music through. He opened the door.”

Paul Simon blended different strains of acoustic black South African folk music with American rock-and-roll in his Graceland album. And, yes, he too made money doing so. But his money did not come at the expense of South African musicians. Like Presley, Simon expanded the audience of those interested in local music. And just as Presley’s music contributed to ending segregation, Simon’s music heightened American interest in conditions in South Africa, hastening the end of apartheid. 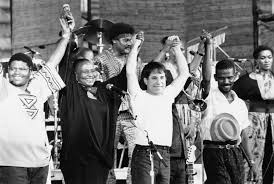 Recently, there was concert at Berkeley’s Zellerbach Hall. During the day, Berkeley students learn about the evils of cultural appropriation. But that evening, they could hear what happens when cultures and peoples intermix, freely appropriating the best of each other’s civilizations.

The concert featured cellist Yo-Yo Ma, born in Paris to Chinese parents, and educated in the United States. Accompanying him was Leonidas Kavakos, a Greek musician who first gained international fame as the winner, at age 18, of the Sibelius Award, named after the famous Finnish composer. Completing the trio was Emanuel Ax, an American pianist born in Lvov, Poland to Jewish parents who were concentration camp survivors. Ax is married to Yoko Nozaki, a Japanese-born pianist. These three prodigious talents treated their fortunate listeners to an evening of compositions by Franz Schubert (Austrian) and Johannes Brahms (German).

No one seemed surprised or disturbed to hear a Sino-Franco American teaming up with natives of Greece and Poland to honor the music of two Teutonic composers. No one imagined that anyone on stage was “appropriating” the culture of others. The audience understood that they were witnessing the product of different races and ethnicities joining together to create performances of universal value and appeal.  No one demanded that the performers stick to their own cultures.

The audience’s only demand was for an encore – which was graciously granted.

4 responses to “CULTURAL INTEGRATION AND ITS DISCONTENTS”