Something troubling has happened at Harvard.

For the past ten years, Professor Ronald S. Sullivan, Jr., in addition to teaching at the Law School, has served as Faculty Dean of Winthrop House, one of the twelve houses where Harvard undergrads live after their freshman year. He has held that post along with his wife Stephanie Robinson, a lecturer at the Law School. (Traditionally, a person in that position was given the title “Master,” but in 2016 that honorific was removed because of its alleged association with slavery – an association that may surprise the hundreds of graduate students upon whom Harvard annually bestows Master of Arts, Master of Business Administration, Master of Public Administrations, and Master of Science degrees.)

In addition to teaching law, Faculty Dean Sullivan has had a notable career as a practitioner. Over the years, he has represented Michael Brown, a black man shot by the police in Ferguson, Missouri; Aaron Hernandez, the late New England Patriot convicted of murder; and the family of Usaamah Rahim, a suspected ISIS terrorist killed by the Boston Police.

Last January, Sullivan got involved in another high profile case, when he joined the defense team of Harvey Weinstein. 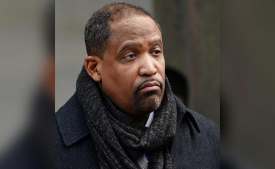 As soon as he announced his association with Weinstein’s defense team, Sullivan came under attack.

Students sprayed graffiti on school buildings: “Our rage is self-defense,” and “Whose side are you on?” and “Down W [sic] Sullivan!” They staged a sit-in at the Winthrop House dining hall. They demanded a public apology, and Sullivan’s removal from his post as faculty dean. They demonstrated with tape over their mouths to symbolize … well, it’s not clear what exactly the tape symbolized, as there had been absolutely no efforts by anyone to silence them. On the contrary, everyone at the University, including Sullivan himself, encouraged the students to express their feelings.

The University responded to the protests the way college administrations generally do nowadays when an individual faculty member takes an unpopular position. It supported the protesters. Several administrators, including the Dean of Students and the College Title IX coordinator, attended the demonstration and stayed to talk with the students afterward. The Office for Sexual Assault Prevention and Response set up a table and served hot chocolate.

Dean of the College Rakesh Khurana wrote an email assuring the students that he took “seriously the concerns that have been raised.” He informed them that he had met with Sullivan “to discuss his responsibilities to the House,” and had warned him that “more work must be done to uphold our commitment to the well-being of our students.”

Two weeks later, the University announced that it was undertaking a “climate review” to address the concerns of Winthrop House residents over Sullivan’s decision to join the Weinstein defense team. “When climate concerns arise in a faculty-led unit,” Dean Khurana noted, “the College and the [Faculty] have procedures in place to gather additional information to assess the situation and to provide confidentiality to those participating in the information gathering process.”

In the course of the confidential “climate review,” reports surfaced that Sullivan and his wife had long been nasty bullies, who had injected “a culture of fear” in Winthrop House.  Unnamed former Winthrop staff members told the Harvard Crimson that they saw House administrators “cry while on the job sometimes after being told to do things they believed fell out of their purview, including personal errands and tasks for the faculty deans such as grocery shopping.”

One can only speculate as to why these reports had not surfaced earlier in the ten-year tenure of Sullivan and his wife, or why they emerged only after he had become the subject of protest for representing Weinstein.

On May 11, Dean Khurana circulated an email to the students proclaiming the equivalent of “Mission Accomplished.” “I am writing to let you know that Ronald Sullivan and Stephanie Robinson will not be continuing as your Faculty Deans when their term ends on June 30, 2019.” He attributed the decision to terminate their posts to “concerns about the climate in Winthrop House.” He acknowledged that he was imparting this news during exam time, and he apologized to the students “for any disruption.”

It has become fashionable to deem difficult occasions “teaching moments.” This affair certainly could have qualified. Harvard, as an elite center of education, could have used the moment to teach its students some important lessons about the rights of the accused. Instead of providing hot chocolate, the school could have provided copies of the Constitution, whose Fifth and Fourteenth Amendments guarantee due process to all defendants in criminal cases, and whose Sixth Amendment guarantees the assistance of counsel.

Then the University might have instructed the students that upholding these rights is especially important when the client is despised, and that legal representation of a repulsive client does not amount to endorsement of the conduct of which that client stands accused. On the contrary, our legal system depends most heavily upon protecting the rights of the unpopular since the rights of the popular are rarely threatened.

The University might have gone on to inform the protesters that Harvard-trained lawyers have a rich history of representing the repulsive and the obnoxious, including communists, Nazis, and KKK members. The University might even have mentioned that this history is based on bedrock legal principles dating back to a time before the nation was founded, all the way back to John Adams, Harvard Class of 1755, who volunteered to represent the British soldiers indicted for murder in connection with the Boston Massacre.

Finally, the University might have taught the students that all of us, even woke Harvard students, have a vested interest in assuring that Harvey Weinstein receives a fair trial, including the presumption of innocence and the corresponding requirement that the state prove its case. For any of us could one day face criminal prosecution.  If that happens, all of us would surely want to see these legal protections extant and vibrant.

To its shame, Harvard did none of those things. Instead, it removed a faculty member from an honored position solely because he did what lawyers are encouraged to do: defend the unpopular.

First we see aggrieved students masquerading as victims. The ridiculous image of Harvard students – perhaps the most privileged creatures in the universe – demonstrating with tape over their mouths, as though no one will even listen them, comes to mind.

Second, we see the infantilization of the complainants, petted and served hot chocolate. We see it in the Dean’s apology – not to Professor Sullivan – but to the students, for his poor timing in terminating Sullivan and his wife during exam period, when it might disrupt their studying.

And third, we see the obnoxious sense of moral superiority exhibited by students with no valid claim to that status.  “Our rage is self-defense,” wrote one graffiti artist, justifying their conduct on the basis of their supposed purity. No, their “rage” was their petulance.

Unfortunately, this sense of moral superiority is noxious enough to infect its victims. On May 10, Professor Sullivan told the Judge assigned to the Weinstein case that he was withdrawing from the defense team. The timing is murky. It’s not clear whether he hoped that his withdrawal would forestall termination, or whether he already knew he was being terminated and was just tired of the fight. In either case, it is likely that his long immersion in the toxic climate of academe had corroded his confidence in his own convictions and principles.

“The lamps are going out all over Europe, we shall not see them lit again in our life-time,” British Foreign Secretary Sir Edward Grey remarked to a friend on the eve of the First World War. There are many kinds of lamps. Education is supposed to enlighten, and so the lamp of learning is a university symbol. Yale’s motto is Lux et Veritas: light and truth.

With the termination of Professor Sullivan for the sin of representing a reviled criminal defendant, one can see a lamp going out at Harvard, and, in the midst of the Spring sunshine, a darkness descending.