GAME OF THRONES FOR DUMMIES AND POLITICOS

Game of Thrones concluded last Sunday as the most watched HBO show in history. But it wasn’t watched by everyone. Many people are more interested in politics than fantasy. While millions waited anxiously to learn the fates of the candidates vying for the Iron Throne, millions more were closely following the candidates crisscrossing Iowa.

On close inspection, there is no conflict between fantasy and politics. They’re both there in Game of Thrones, which, like The Wizard of Oz, is actually an allegory about contemporary politics. It’s not easy to discern the political messages. You have to watch carefully.  If you do, here’s what you find.

At the outset, the Isle of Westeros (the United States, of course) is facing an environmental crisis. “Winter is coming,” warns one character after another, predicting that the realm is facing climate change, and complaining that no one is doing a damn thing about it. At the same time, the country – or the Isle – is facing an immigration crisis. The Free Folk are pouring over the northern border. And they’re not sending their best. They’re bringing crime. They’re bringing milk of the poppy. They’re bringing rapists – which, in this milieu, is tantamount to bringing coals to Newcastle. Some Wildlings, one can assume, are good people.

The people in the North build a beautiful Wall to keep them out. But the Wildlings don’t really want to emigrate. They would stay in their own country if they could, but they’re forced to flee because a vicious gang of white walkers, based on MS 13, is terrorizing them. They desperately seek asylum on the other side of the Wall.

Meanwhile, South of the Wall, the people of Westeros are divided. Some are under a sigil bearing what looks like a direwolf but, on closer inspection, is really a fox, because these people get their news from Fox, and are basically conservative. They follow House Stark, which believes in traditional family values. They live in flyover country (if you’re a dragon). They wear dowdy clothes and lead dull, moral lives.

The Starks are engaged in a culture war with the Lannisters, a coastal elite consisting of beautiful blonde sexy people, who look like Hollywood celebrities, and who use their wealth to bribe people to get their hopelessly unqualified kids into the best palaces.

The Starks consider the Lannisters decadent. They particularly dislike the fact that Jaime and Cersei Lannister are practicing same-sect marriage. The Lannisters consider the Starks a bunch of deplorables. But it’s hard to resist modernity. When the two Houses meet, the conservative values of House Stark go out the window. As does young Bran Stark. More on him later.

The Starks and the Lannisters are both worried about Daenerys of House Targaryen. She thinks she ought to sit on the Iron Throne because she controls dragons, and dragons are the best solution to climate change. They represent nuclear power, a renewable source of light and heat. Especially heat. But when Daenerys brings a dragon to King’s Landing to demonstrate the efficacy of nuclear power, the demonstration does not go well. It degenerates into a medieval Chernobyl, incinerating the inhabitants and ruining the potential market for the product. Now all of Westeros realizes that those people muttering “Winter is coming,” really meant nuclear winter.

Another reason Daenerys is unpopular is her ambitious globalist foreign policy. She travels to Meereen, a/k/a the Middle East, and assumes control over the Dothrakis, a/k/a the Iraqis. Then she uses the Dothraki/Iraqi army to liberate other peoples, including the Unsullied, a corps of former slaves who march to war under the slogan: “Black shields matter.” She addresses the Dothrakis/Iraqis and the Unsullied, and announces “mission accomplished,” but adds that this is only the beginning. She is going to lead them all over the world, liberating one kingdom after another. Jon Snow, a traditional Starkian conservative, realizes that Westeros cannot afford endless and expensive wars. Even though he loves hanging with Daenerys, he places country above party and impeaches her to death.

While the Stark, Lannister, and Targaryen Houses fight for power, other Houses get involved on one side or another. It’s difficult to keep them straight, especially if you’re binge-watching. Most poll poorly, and are politically unimportant. One faction worth mentioning are the socialists. They’re not called socialists in the series, of course, but it’s easy to detect their political leanings because they are always referred to as “red.”

There’s the Red Priestess Melisandre, based on Alexandria Ocasio-Cortez, who goes around warning people that  “the night is dark and full of terrors,” and predicting that they’re all going to die in twelve years unless they accept the Lord of Light Environmental Footprints.

And there’s the 95-year old Walder Frey, based on Bernie Sanders, who hosts a Red Wedding, where all the mainstream politicians are purged. 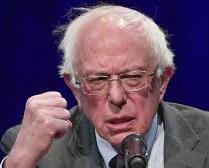 Ultimately, socialism collapses in a heap of rubble of its own contradictions in the Red Keep.

In the final episode, the conservative House Stark pulls off a political coup. They persuade the other Houses that Bran Stark, confined to a wheelchair since he was thrown out of a window by Jaime Lannister, is the second coming of Franklin Delano Roosevelt. They nominate him for King of all Westeros. He runs for office on the slogan: “The only thing we have to fear is fear itself. That, and dragons.”

He carries every kingdom except his home district of Winterfell, which his sister Sansa carries. Winterfell secedes from Westeros, while Jon Snow travels north to accept the nomination of the Free Folk to become their king. Another Stark, Arya, leaves Westeros to journey to parts unknown, intending to launch her own political career there.

Thus House Stark, those stodgy old traditionalists, reveal themselves to be an agile and wily political machine, able to achieve total power. At the series ending, there is a Stark in a leadership position in every district of the known world, and another Stark exploring areas in which to exert control in the unknown world.

So that’s what Game of Thrones is about, and if you missed it because you were following politics, you needn’t worry. Another series is in production even as we speak, among the houses, keeps, and kingdoms of the United States. That series finale will air in November 2020.

4 responses to “GAME OF THRONES FOR DUMMIES AND POLITICOS”